Video series on the Common Octopus, Octopus vulgaris continues, this time we want to show how the almost perfect mimicry would not be such an effective weapon. Certainly not because of the Octopus that also in this case manages to blend so well with the seabed that it is impossible to recognize it from the surface, but because of an intruder the Serranus scriba Painted comber (or rather two). Polpo Mimetismo Octopus Mimicry intotheblue.it 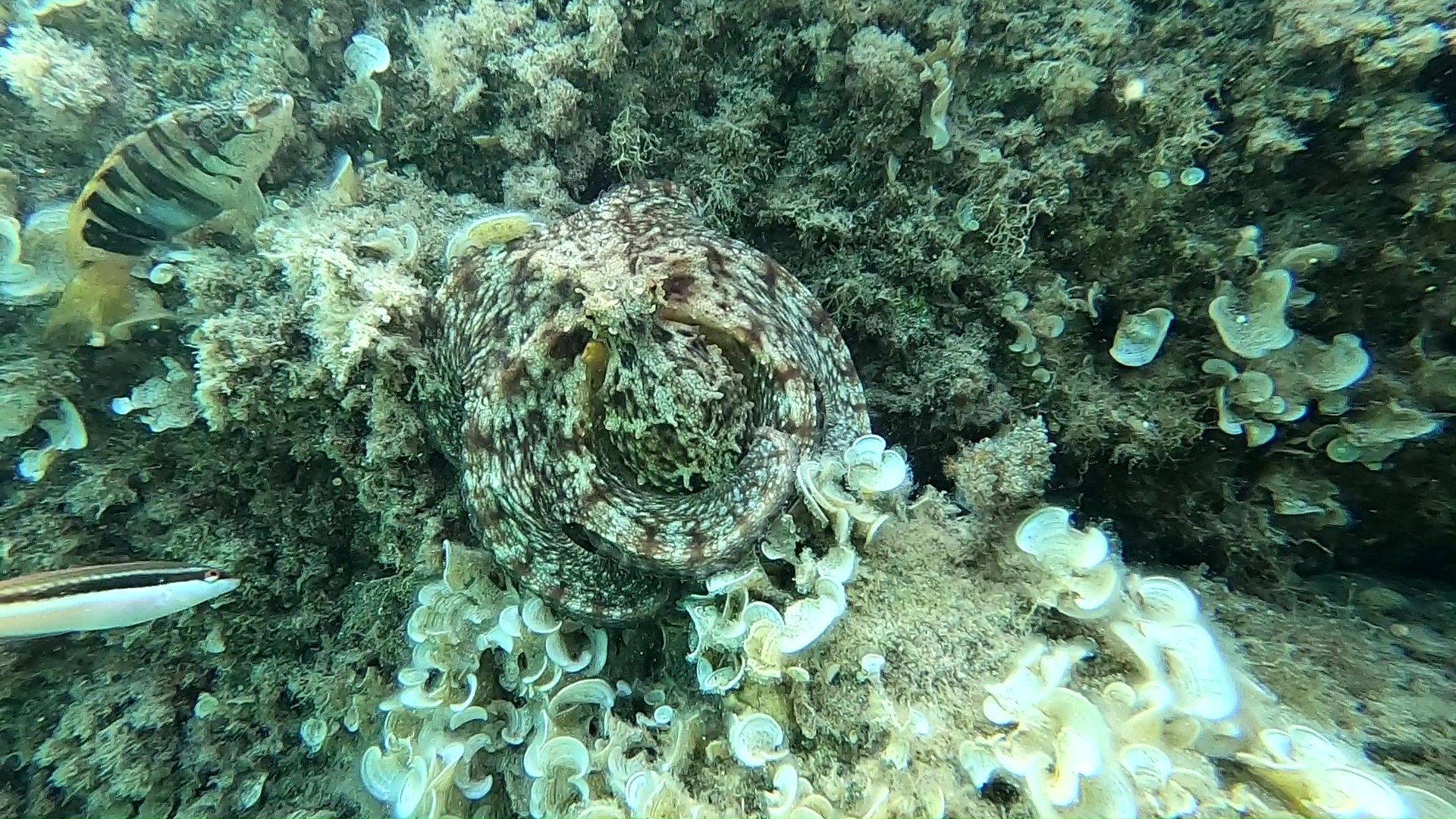 This fish belonging to the Serranidae family seems to be an inseparable life partner of the Octopus, and once again the two fish reveal the presence of the Octopus by staring closely in few centimeters (beeing a spy for the diver) and so nullifying the practically perfect camouflage.

As you can see in the video as soon as we approached the Octopus changes defensive tactics, passing from mimicry, the choice of being invisible, to that of “appearing” looking bigger and more threatening by changing shape and color, but even this strategy will be not very advantageous so escape results the only one way. 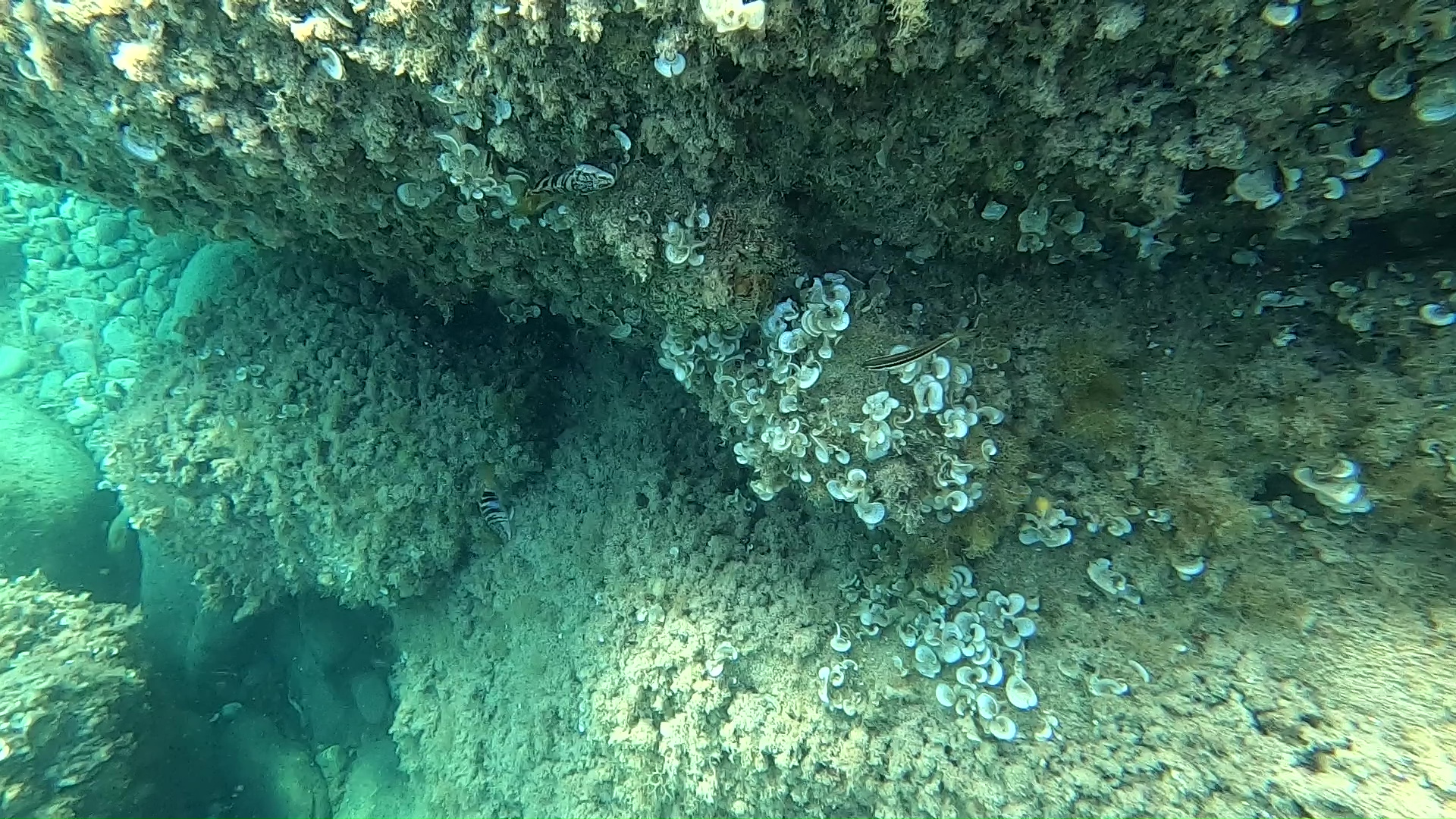 The two serranids obviously react accordingly, suguendo the Octopus, even in the escape. This behavior of the Sciarrano is quite frequent towards the Octopus (we have talked about it quite often) which seems to tolerate the presence of these fish.

Common octopus (Octopus vulgaris Cuvier, 1797) or octopus is a cephalopod mollusc of Octopodidae family, which is not to be confused with the octopus that instead it is the animal (belonging to the Cnidaria) that gives rise to the coral.

It is a cephalopod mollusk very common in shallow water, no more than 200 meters. He prefers rugged substrates, rocks, rich because of hiding places, cracks and small caves in which to hide: the absence of endo- and exoskeleton allows him to take any form, and to go through very narrow passages. Present in all the seas and oceans, it is also widespread in the Mediterranean Sea. In the Mediterranean, it is mainly caught in two different periods of the year: from September to December (in good quantities, albeit still small) and from May to July (during which time it is more large size). 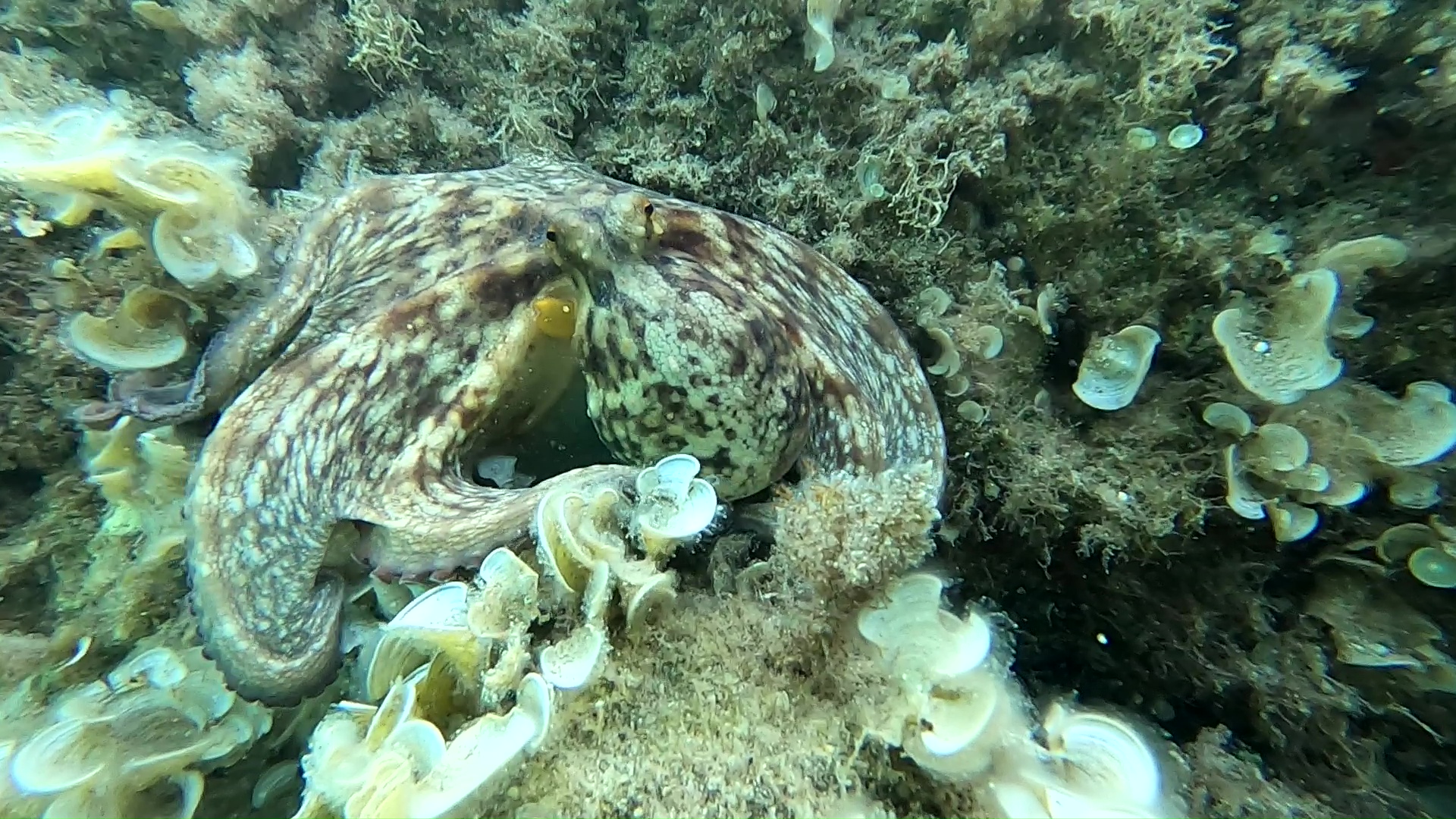 The octopus has three hearts, and has the ability to change color very quickly and with great accuracy in detail. Takes advantage of this ability is to blend it to communicate with his peers. The main feature is the presence of a double row of suction cups on each of the eight tentacles, which distinguishes it from moscardino that has a single row of suction cups. At the center of the eight tentacles, on the lower part of the animal, there is the mouth ending in a horny beak used to crack the shells shells and shells of crustaceans of which it feeds. The coat is long 8-25 cm, the tentacles instead are long on average 40-100 cm, the weight varies from 500 grams up to 7-8 kg of larger specimens. 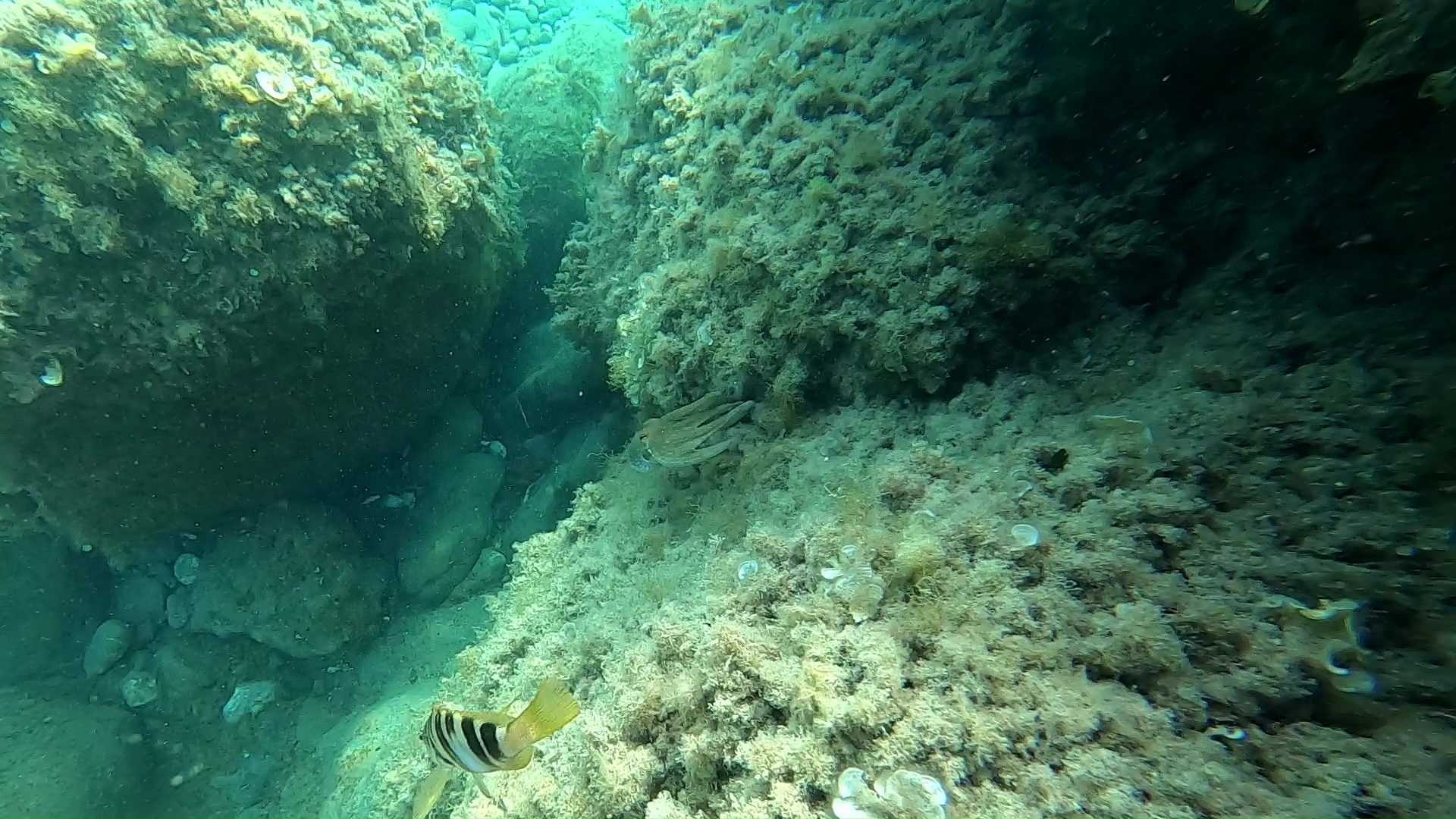 Painted comber (Serranus scriba) is a subtropical marine fish, classified in family Serranidae, the groupers and sea basses. It is found in the eastern Atlantic Ocean, the Mediterranean Sea, and the Black Sea. Confusingly, a synonym of this species is Perca marina, but that name (as Sebastes marinus) has incorrectly been used for a separate species, the rose fish.

Serranus scriba grows to a length of 28 centimetres (11 in). This grouper has a squat body, a large head and a mouth very large in proportion to the body size. Jaws are filled with sharp teeth. The painted comber is orange to red in color with bluish to dark brown vertical stripes that are wider and darker towards the tail. The caudal fin is dark yellow to orange, the dorsal fins are yellow with orange dots and lines. The pelvic fins and pectoral fins are usually monochromatic light yellow. The head shows many reddish-brown lines that resemble Arabic writing (hence the Latin name of the species). On both sides of the abdomen there is a large, bright blue area. S 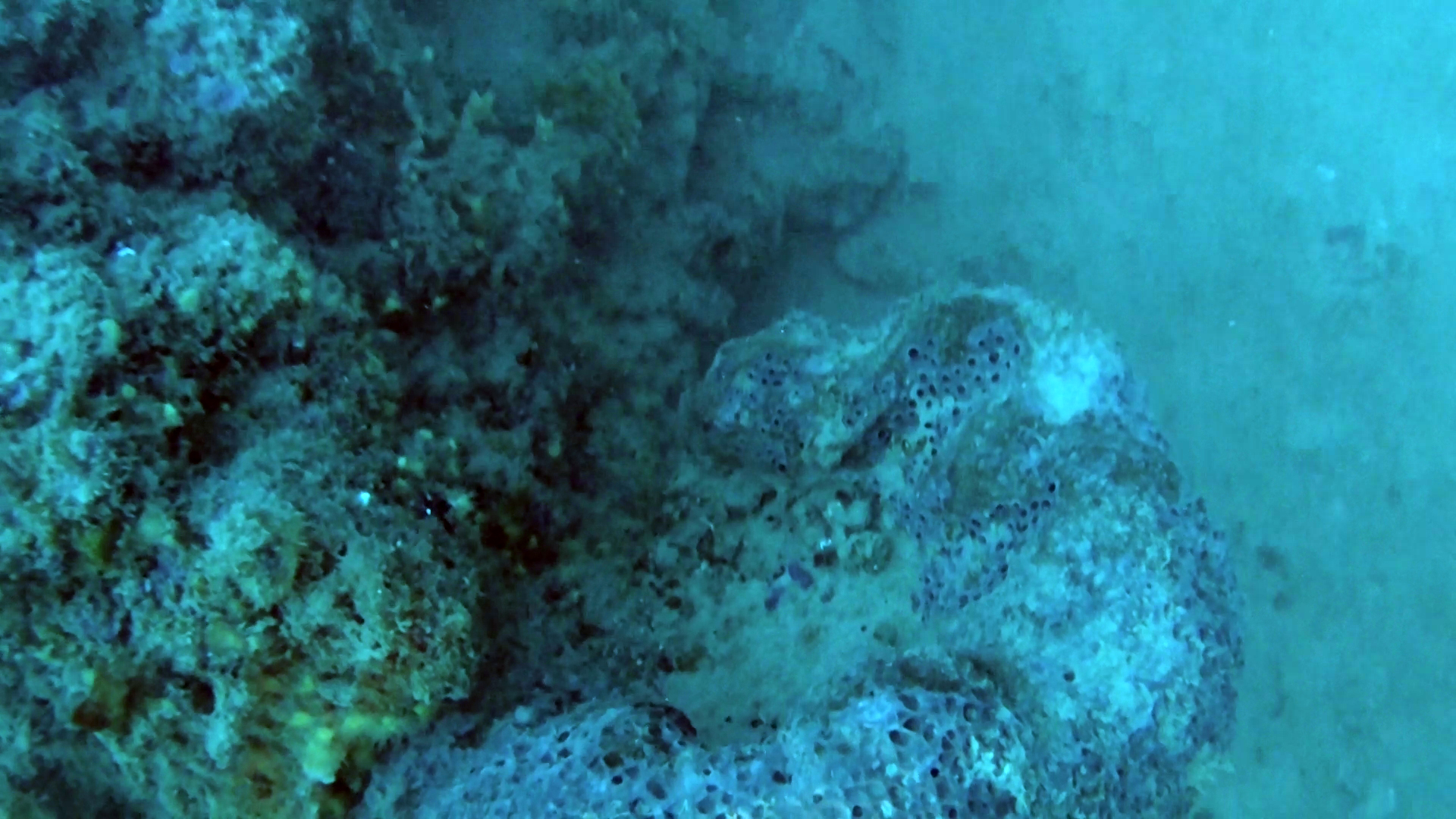 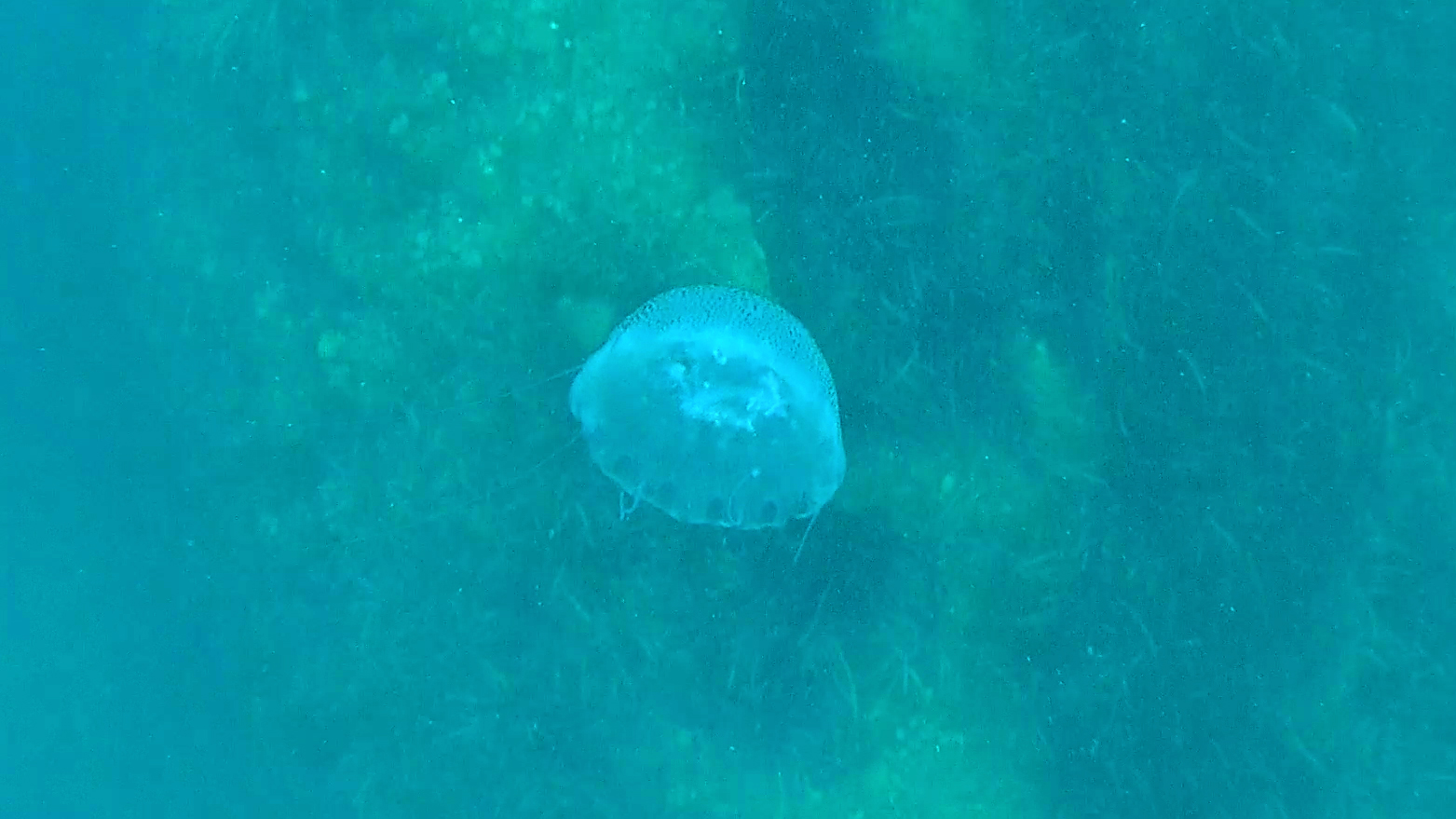