Snorkeling among swimmers in summer, preferably in the shallow waters of the rocky and jagged coast, it is easy to meet the sea bass on the hunt. European sea bass or Sea bass, Dicentrarchus labrax, is a salt and brackish water fish of the Moronidae family. Seabass Hunting Branzino in caccia intotheblue.it 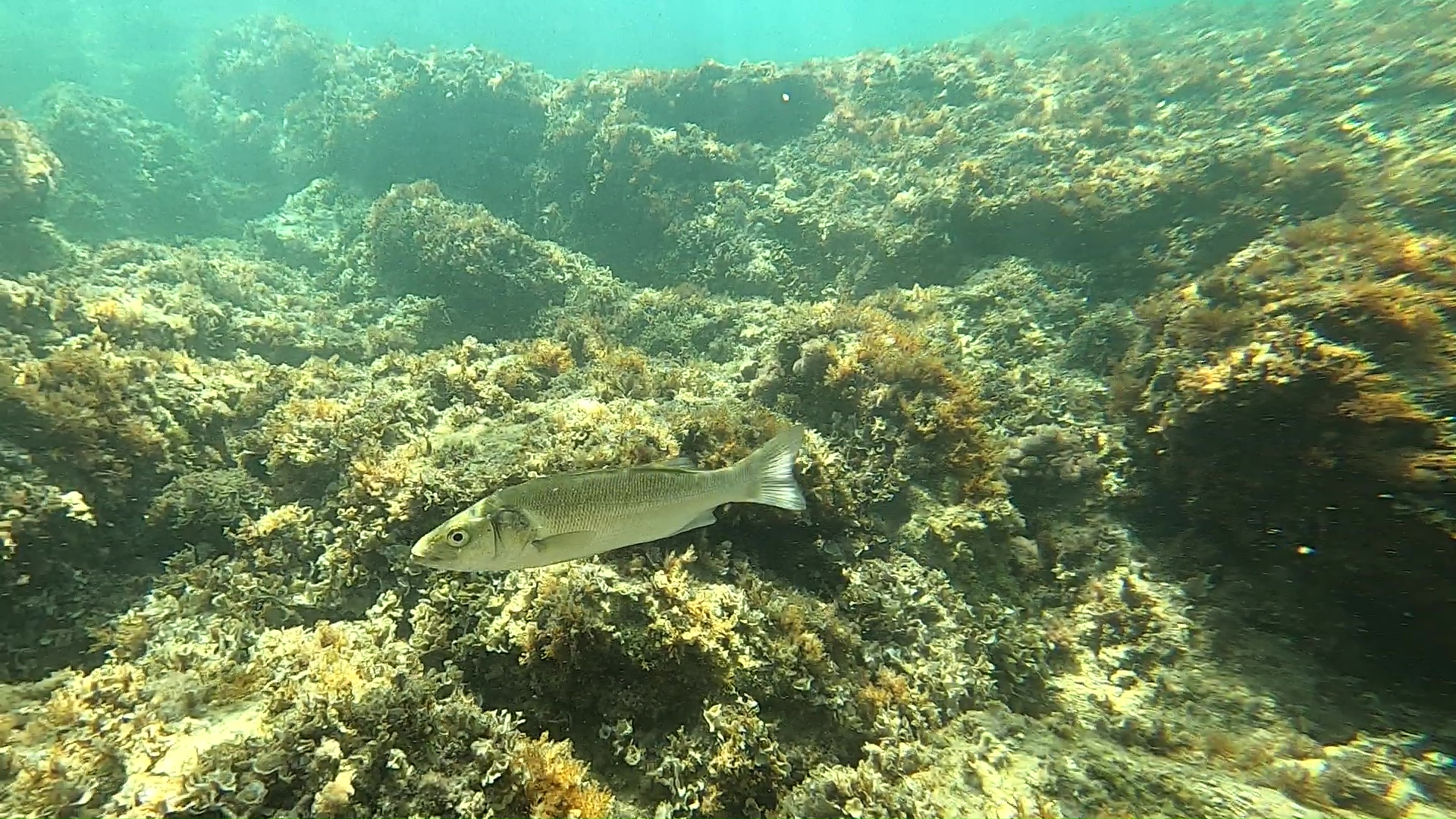 In the video we see some specimens of various sizes and ages trying to capture one of the most natural prey of this species: Atherina boyeri,  is a small freshwater and marine fish belonging to the family Atherinidae. These small fish live in dense shoals of many elements a bit like anchovies and sardines, but have more coastal habits, and are the prey par excellence of some predatory fish such as sea bass (or sea bass) and from late August to October of others such as the Carangidae, the young Amberjack (Seriola dumerili), Lichia amia, Trachinotus ovatus. 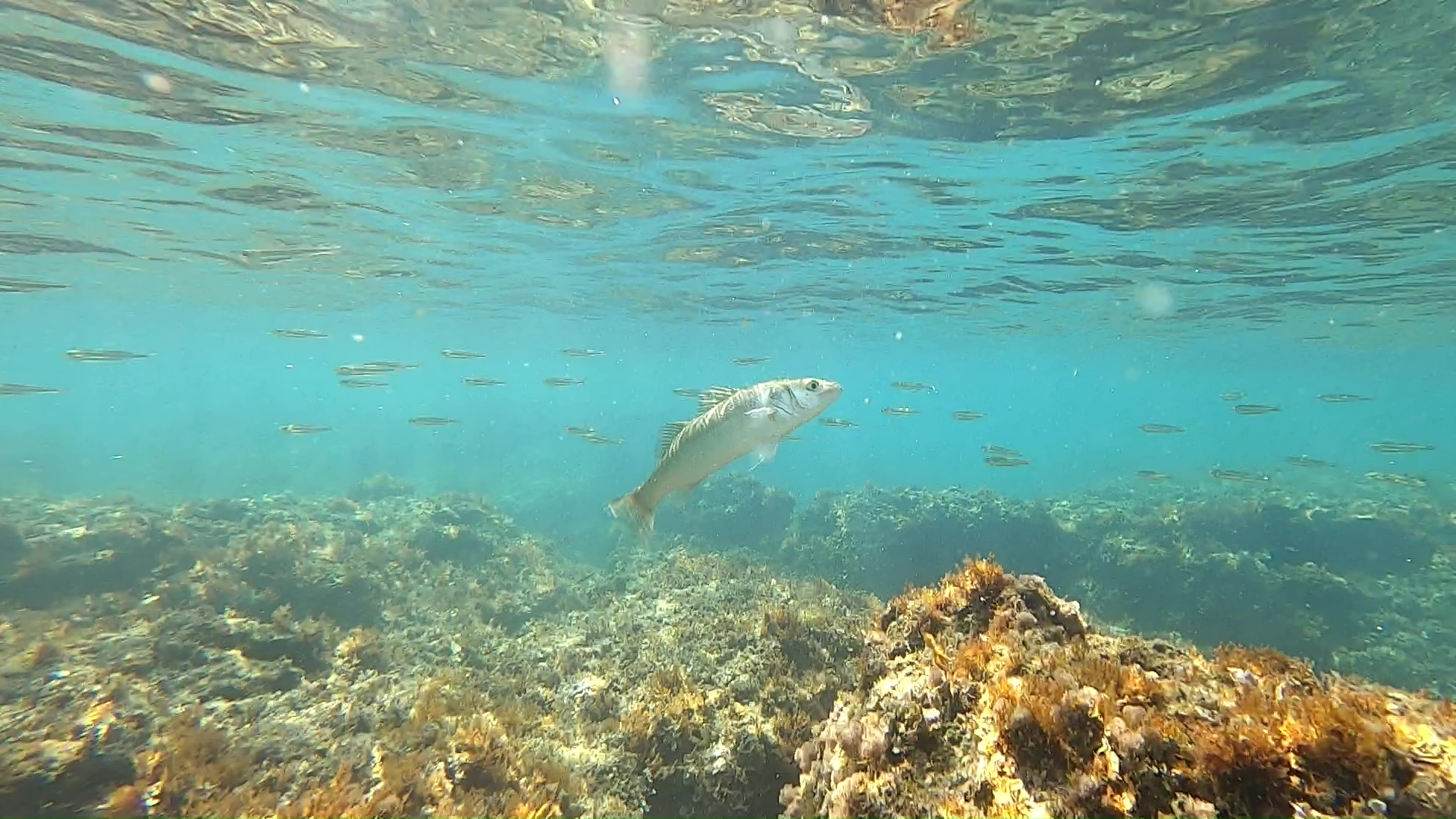 Sea bass often live and hunt in flocks of individuals of different sizes and ages. In this case, however, there does not seem to be a real hunting strategy and that the attacks on the small silversides take place by solitary individuals who then reunite at the end of the attack in the herd together with the other Seabasses.

In this video we notice that the bass while hunting prefers to launch its attacks from the bottom up, and that it is equipped with a sprint and lightning speed. So busy in capturing the prey she doesn’t even care so much about possible intruders such as divers, or myself who is trying to get closer to film everything. 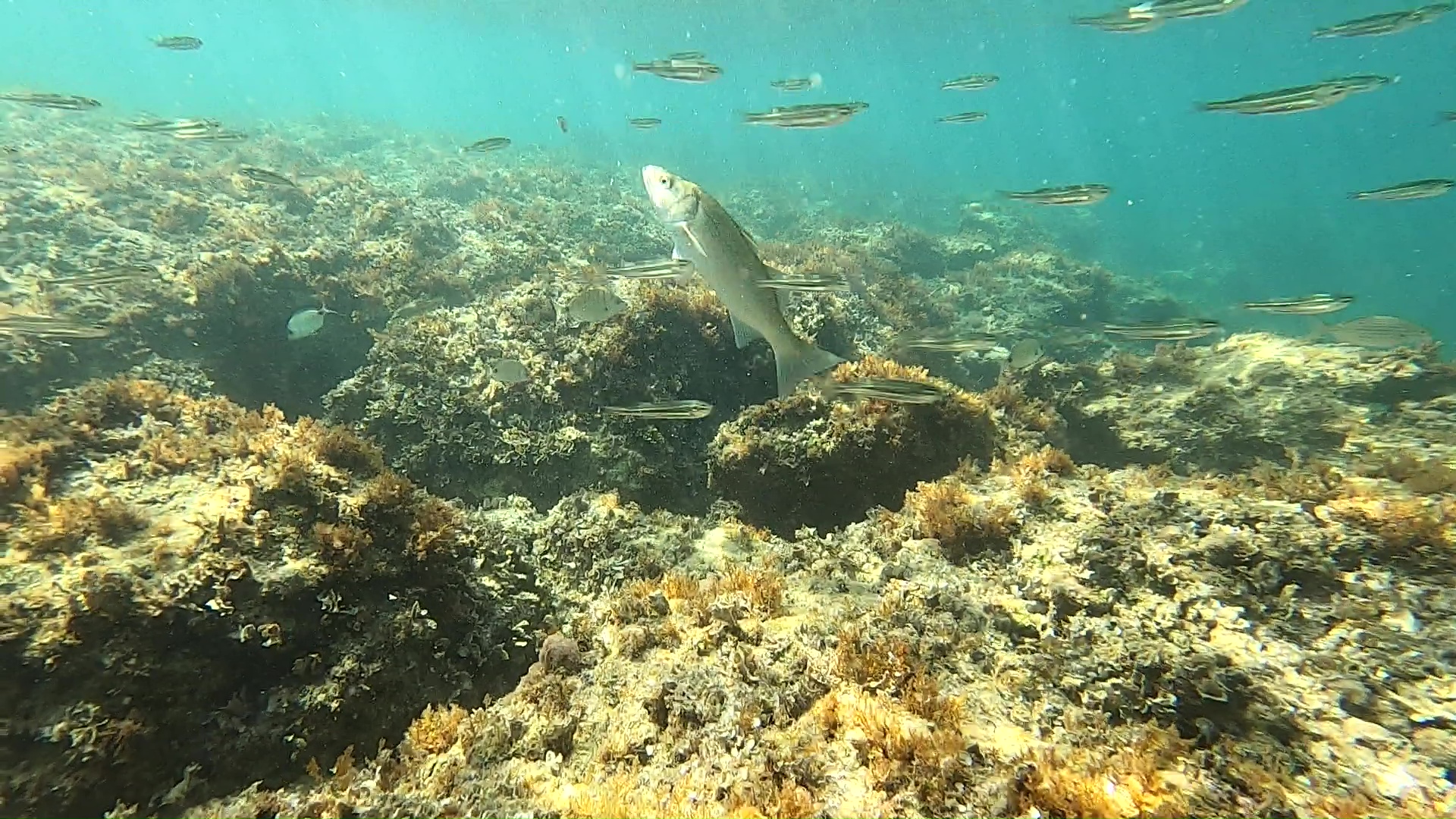 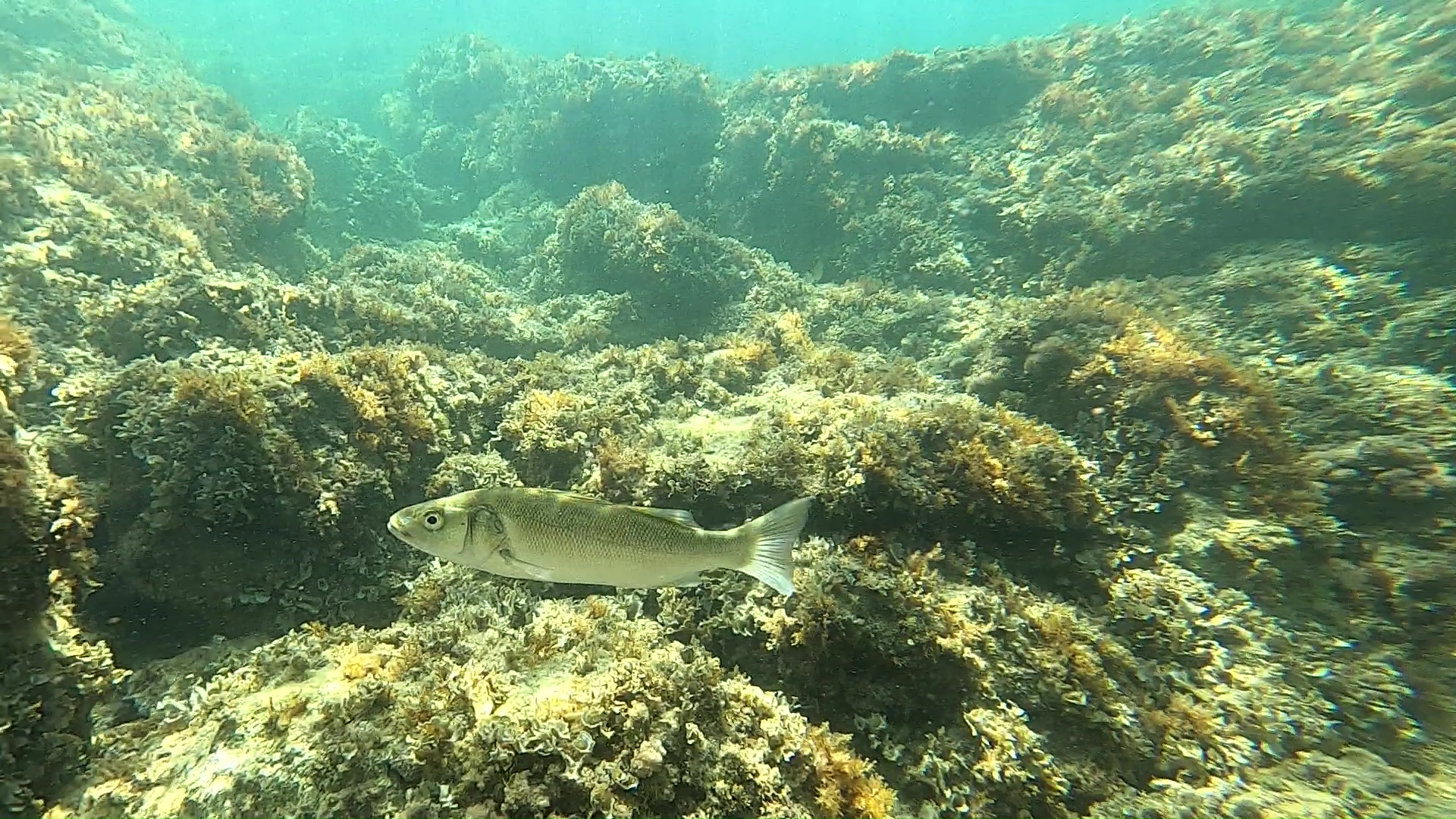 European bass (Dicentrarchus labrax) is a primarily ocean-going fish native to the waters off Europe‘s western and southern and Africa‘s northern coasts, though it can also be found in shallow coastal waters and river mouths during the summer months. It is one of only six species in its family, Moronidae, collectively called the temperate basses.

It is both fished and raised commercially, and is considered to be the most important fish currently cultured in the Mediterranean. In Ireland and the United Kingdom, the popular restaurant fish sold and consumed as sea bass is exclusively the European bass. In North America it is widely known by its Italian name branzino. 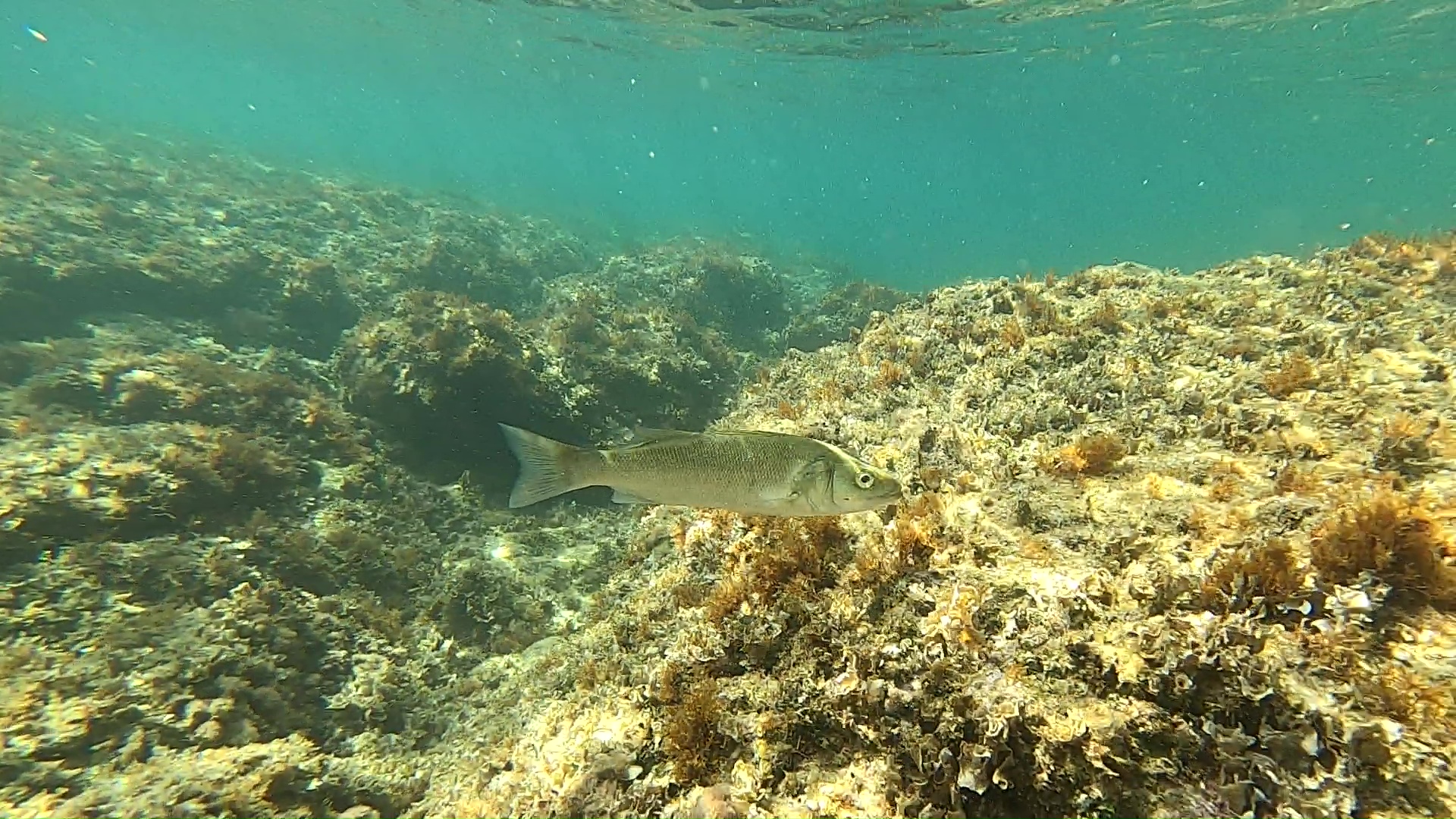 European bass can reach sizes of up to 1 m (3.3 ft) in length and 12 kg (26 lb) in weight, though the most common size is only about half of that at 0.5 m (1.6 ft). Individuals are silvery grey in color and sometimes a dark-bluish color on the back.

Juveniles form schools and feed on invertebrates, while adults are less social and prefer to consume other fish. They are generally found in the littoral zone near the banks of rivers, lagoons, and estuaries during the summer, and migrate offshore during the winter. Despite being a sought-after gamefish, it is listed as Least Concern by the International Union for the Conservation of Nature because it is widespread and there are no known major threats. 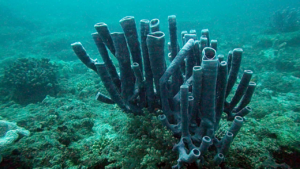 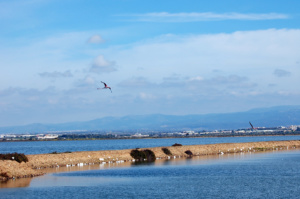